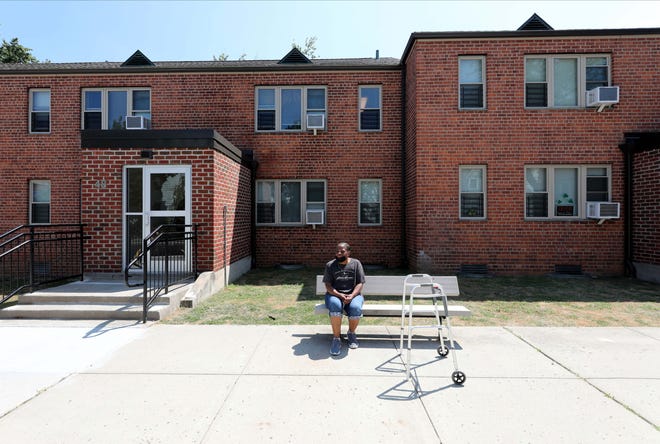 On hot days, the AC unit mounted in the 60-year-old’s living room window gives the only whirring respite she has. She sits alone on her bed, watching CNN or making calls to family.

Outside, among the low-rise brick public housing building she’s lived in for six years in Southwest Yonkers, it’s empty in the courtyard and on crumbling sidewalks. There are no trees to break up asphalt and concrete around the buildings. The benches meant for residents — who are typically Black, Latino, elderly and disabled — are exposed to the beating sun.

The only cool, shady area — visible from beyond Lee’s AC unit — is a fenced-off empty lot that has just two trees. It frequently floods there, with water stagnating for days after a downpour.

In extreme temperatures, this can be dangerous for Lee, who came to the Loehr Court apartments after she had a stroke while working as a psychiatric care manager. It left her on a walker, and she also has diabetes, which makes it harder for her body to produce sweat when it’s hot. She’s confined inside, near the AC.

Even if she escaped her cell, she’d still be trapped on a heat island, a neighborhood with little shade and lots of buildings and pavement that retain heat, keeping the temperature hotter than rural or suburban areas.

In Southwest Yonkers, there is much less greenspace or trees that can cool it, and it also faces increased flooding that destroys buildings and isolates residents. Mostly low-income Black and Latino residents are trapped on each island, whether caused by urban heat or a flood, trying to look for their own way to cool off or stay dry.

“It erodes social cohesion,” said Brigitte Griswold, who sat on a rock by one of Nodine Hill’s few trees at School 23 on a recent Friday afternoon, when temperatures reached the 90s in Yonkers. “And with that comes a compromised ability to build resilience in the face of climate change.”

Much of these maps correspond with redlining, the outlawed racist practice used by the federal government in the mid-20th century to determine which areas got loans. Communities of color and immigrant communities often saw the worst discriminatory practices by the Home Owners’ Loan Corporation, a New Deal-era program, that banks and other lenders used.

In 1937, maps outlined many Southwest Yonkers neighborhoods in red ink to mean “Hazardous,” such as Nodine Hill, or in yellow for “Definitely Declining,” which included Lee’s neighborhood.

Residents living or moving to these areas struggled to obtain home loans that could build wealth and also give a stake in bettering their neighborhood. This could include projects such as a new park or updating sewage systems, but it could also mean tree-planting or gardens.

As a result, many communities suffered neglect or received large projects, such as wide streets, parking lots, industrial areas or public housing, even after the Civil Rights Act’s provisions for the Fair Housing Act outlawed redlining.

Redlining maps helped create urban heat islands that raise temperatures by as much as 10 or 15 degrees. The profusion of concrete and paved surfaces also limits water drainage during floods. In Southwest Yonkers, the city’s centuries-old combined drainage and sewage system makes it harder to empty still water during a storm. It also creates a public health concern with raw sewage overflowing.

Outside the Grinton I. Will Public Library, Kisha Skipper sat for an interview on a bench surrounded by trees in a cool area covered in bark.

This greenspace differed from the congested southwestern neighborhoods she’s advocated for as the first vice president of the Yonkers NAACP, whether it’s with housing or evictions, or with climate change for the city’s newly formed task force.

During heavy rains, she pointed to streets often flooded to one’s shin. When there’s a heat wave, one resident, she added, goes to the emergency room to cool off.

“If people don’t start speaking up and speaking out, we’re going to see tragedy,” she said.

In Portland, Oregon, dozens died from one heat wave in 2021. Inside the city’s Leach Botanical Garden, Vivek Shandas lit 96 candles, for all those who died in Oregon, on June 26. Temperatures during the lighting hovered around 100 degrees to mark the hottest day of 2022.

The day marked the start of “Heat Week” to address the effects of climate change that sparked last year’s heat wave that broke record temperatures in an area known for its gloomy days.

In Portland, temperatures were the worst in the city’s urban heat islands. A mile away from the botanical garden, Shandas recorded air temperatures of 124 degrees in a congested, heavily paved intersection in one of the city’s lowest income neighborhoods in southeast Portland. In the sun, the surface temperature was 180 degrees. “You actually get a nice, fully cooked egg in that level of temperature,” he said in a phone interview.

“It goes back to a lot of conditions that have been created by human decision-making processes,” he said. “What we really want to do is try to figure out what are the ways we can unpack some of this and get ahead of it before the next storm arrives.”

Everything you need to know about heat:From the heat index to a heat dome to an excessive heat warning

In Yonkers, Mayor Mike Spano looked to a stretch of days in mid-July when the city received extreme rainfall that temporarily shut down one of the old parkways connecting to New York City. Hilly streets became streams with floodwater rushing down.

Later in the week, the city declared a heat wave, with temperatures in the high 90s.

In Yonkers neighborhoods such as Nodine Hill, it would be even hotter.

On Sunday, the last day of the heat wave, temperatures recorded by a USA TODAY Network New York reporter indicated Lee’s courtyard was just shy of 107 degrees. Up the street, on the asphalt at Lincoln Park, men and women played cards under a tree, though it was still close to 104 degrees. Humidity would havemade it feel even hotter.

The city now has undertaken tree planting in narrow, southwest neighborhood streets, along with the construction of two new parks and two new schools better equipped for extreme weather. These can also serve as gathering centers for people during a storm or heat wave.

On hot days, Brianna Rodriguez didn’t play on the swings at her Nodine Hill elementary school.

At recess, she walked around School 23’s playground that was built on a black rubber mat over concrete. The sun glared directly over the playground, including the swingset, her favorite. She joined hundreds of students huddled under a few trees instead. School 23 is a large brick building for K-8 students built in 1918.

“I had always felt that it was hotter,” Rodriguez, now 18, said on a recent Friday afternoon in the shadow of her old school. “It was just evident to me.”

On July 1, temperatures were in the 90s. But Rodriguez — who had a gold necklace that said “Brooklyn,” her middle name — felt it was even hotter in Nodine Hill. The neighborhood is just a mile uphill from the Hudson River, which provides daily breeze for those along the water.

School 23’s playground, which is open to the public, was nearly empty a week after classes ended. A few teens sat by one of the basketball hoops in the shade.

Down the street, children took turns running past an open fire hydrant that sprayed water into the middle of the street. As they passed, they screamed as the cool water blanketed them. Rodriguez did the same as a kid — a quick respite from the heat.

The hydrants have only been a small fix toward addressing immediate health risks in urban heat islands.

Young children, elderly people, those who are overweight, and people who are sick are most at risk for a heat-related illness, according to the U.S. Centers for Disease Control and Prevention. Along with heat exhaustion or rashes, people can have a heat stroke, when the body is unable to cool down, that may cause permanent damage or death.

“Southwest Yonkers sees a big pocket of vulnerability based on these kinds of things, and also based on minority populations,” he said. “And it’s very tied up to the link of redlining.”

Want to beat the heat?Why it may be more expensive in the Hudson Valley than in the past

For now, the lot behind Lee’s apartment in Yonkers is empty. There are two trees in the lot, one of which towers over the brick apartment building. A few feet beyond that, under grass and weeds, are remnants of old railroad tracks. The New York and Putnam Railroad, or Old Put, once ran suburban commuters to New York City.

Groundwork and the Municipal Housing Authority for the City of Yonkers have plans to replace the lots that made up the Old Put with a 2.4-mile greenway that connects much of Southwest Yonkers. The path aims to ease flooding that affects the area, along with helping to cool the area during hot days.

Lee would like a garden with some shade. She doesn’t know many of her neighbors. A common outdoor space, she feels, would better connect residents. She envisions sitting outside for lunch. She’d plant string beans and tomatoes to start.

“I have a disability, but I still want to mingle with people, my neighbors,” she said. “I would love to participate in planting and taking care of those things, you know? I would love to do that.”

One of Old Put’s stations was just south of Lee’s building, on a dead-end street behind apartment buildings and clusters of houses. The line closed in June 1958, before Lee was born. In the 1960s, it was converted into a park, according to a city press release.

For decades, the site of the Lowerre station was a dumping ground. Google Images from September 2018 show tires and litter strewn about.

In 2019, the city and Groundwork built a playground at the old station as part of the launch of the greenway.

Ligia Gomez lives behind the newly minted park, but her three children can’t use the playground on summer days. Gomez said her children end up dancing, so as to not have their feet touch the scorching ground or equipment for long.

While there are trees to the side and an abutting apartment building gives some shade, the playground has a black rubber mat. The equipment also has dark surfaces. Both trap heat.

“It’s a good place,” Gomez said on a recent Friday afternoon, when no children played on what looked like a merry-go-around and a climber. “But in the summer when you want to use it, you cannot.”

On the last day of the heat wave in late July, the temperature at their playground was recorded at nearly 101 degrees, five degrees hotter than the city’s official temperature.

Instead of the playground behind her house, she takes her children to Van Cortlandt Park, in the Bronx, about a mile away. One playground has a splash pad. While she said she’s lucky to have a car, she wants more water for children in Yonkers playgrounds, like those in New York City.

The park behind Gomez’s house will eventually connect to Van Cortlandt Park when the greenway is completed. But for now, Gomez just uses the community garden a few feet from the playground. She’s growing onions, cilantro, mint, oregano and tomatoes for her family.

This story is part of an extensive USA TODAY Network reporting project called “Perilous Course,” a collaborative examination of how people up and down the East Coast are grappling with the climate crisis. Journalists from more than 30 newsrooms from New Hampshire to Florida are speaking with regular people about real-life impacts, digging into the science and investigating government response, or lack of it.

Eduardo Cuevas covers race and justice for the USA TODAY Network of New York. He can be reached at [email protected] and followed on Twitter @eduardomcuevas. 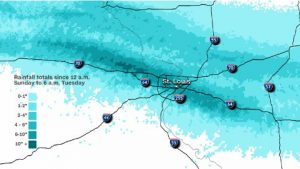